What’s The Difference Between Nitrogen And Nitrous Oxide?

We’ve previously posted blogs about the confusion between carbon dioxide (CO2) and carbon monoxide (CO) as these gases are regularly mixed up. However, we recently visited and exhibited at Northern Restaurant and Bar in Manchester, where a different type of gas was causing confusion.

If you serve nitrogenated beers at your bar, nitrous oxide won’t be much help!

At the event there were approximately 300 exhibitors related to the beverage and hospitality industry and it is more than likely that a large percentage of them use gases such as carbon dioxide (CO2) and nitrogen (N).

Based on this evidence, we thought attendees would know at least some of the properties of these gases, and possibly other gases too.

Despite our assumptions, there seems to be confusion over the difference between nitrogen and nitrous oxide (N2O), more commonly known as laughing gas.

‘WOULDN’T YOU JUST END UP LAUGHING A LOT?’

While speaking to someone from a brewery they asked:

“If there was a nitrogen leak, wouldn’t you just end up laughing a lot?”

This is a misconception, as although they both contain the element nitrogen, they are two different gases.
Nitrogen is a molecule composed of two nitrogen atoms, while nitrous oxide is a chemical compound of two nitrogen molecules and one oxygen molecule.

Nitrogen makes up 78% of the Earth’s atmosphere and is an inert gas that is colourless, odourless and tasteless. It is becoming more commonly used in the beverage industry in beer, wine and juice production. The gas is predominantly used to prevent oxidation which can affect the taste and quality of the beverage and is also used to dispense beer and clean strainers in wine production.

Nitrous oxide is a colourless gas with a slightly sweet odour and taste. It is legitimately used to numb pain during medical procedures such as dental work, in engines to increase their power output, and in whipped cream aerosol cans to prevent the cream from going ‘bad’.

The reason it is nicknamed laughing gas is due to the happy euphoric feeling that people get when they inhale it. Due to these effects, it is recreationally used as a ‘legal high’ and has been dubbed hippy crack.

Inhaling too much of either of these gases can be dangerous as they displace oxygen in the blood, which reduces the oxygen flowing to the brain and other vital organs. This can cause dizziness, loss of consciousness, asphyxiation, brain damage and even death.

Between 2006 and 2012 nitrous oxide was blamed for 17 deaths and a bill has been drafted to ban the production and distribution of nitrous oxide and other psychoactive substances if it is intended to be consumed recreationally. 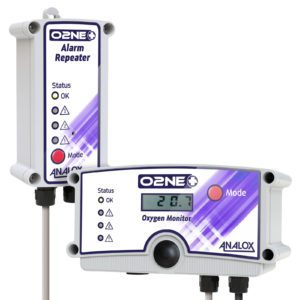 The Analox O2NE+ oxygen depletion monitor, which can be used to monitor nitrogen levels in your coffee shop, pub or brewery.

For users of nitrogen in industries such as beverage and hospitality, Analox offers O2 monitors and sensors to monitor the level of oxygen in the atmosphere where inert gases such as nitrogen are piped or stored.

If you are unsure which gas you need to measure, our knowledgeable sales team will be more than happy to advise you.

Contact us
We use cookies to ensure that we give you the best experience on our website. If you continue to use this site we will assume that you are happy with it.Ok